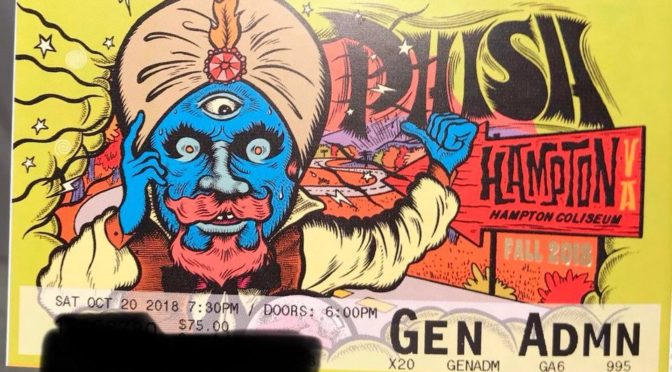 I’m working late on a Friday. My friend, Mike texts me that he’s going up to Hampton Roads, Virginia to see Phish during their three night run. He grabbed a ticket online and was going to meet some friends and go to the show.

Now it does not take long for me to figure out the scenario. I called my wife and asked if she was cool with me heading up for the show and she was. I found a ticket and hotel room and we we’re on our way.

I had wanted to see a show at Hampton for years. The first time was back in 86 when a friend was driving up to see Metallica and Ozzy, he even had an extra ticket. It was a Sunday show and I had classes the next day and I said no. He was not staying the night and it’s about a 6 hour drive round trip.

Well a few months later Cliff Burton, the bass player for Metallica died during their European tour and I was bummed I missed going to that show.

Now a chance to see Phish at Hampton, The Mothership. I have listened to Hampton Comes Alive many times and expected to see a good show.

Mike picked me up and we headed up to Hampton. Listening to Friday nights show on the way we were picking out songs we wanted to hear. We had just seen them a few months before in Raleigh and it was a good show.

We got to Hampton, checked in to the hotel and went to meet his friends. The hotel had a shuttle but after waiting about 20 minutes we ended up walking over to the venue. It was only about a mile and the sun was starting to go down.

Upon seeing the Coliseum it’s impressive. I immediately snapped some pictures and we headed to Shakedown Street. After a quick tour of shirts, stickers and about everything else for sale we found his friends, Colleen and Andrew.

They went the night before and gave us the details of the venue and the show. I mentioned that I wanted to see if I could get a poster as I saw it on Twitter on the way up. They mentioned that they sold out of posters early the night before, however the guy in the car next to us had purchased one and showed it to me. It was awesome and part of me knew that I would not get in early enough to buy one.

We left our stuff in their car and headed in. Once we got inside I went to merch stand and sure enough they were sold out of posters. We grabbed a beer and picked out a nice spot on the floor on Trey’s side. I looked around the coliseum and was amazed at the size. It reminded me of Dorton Arena in Raleigh in terms of size and capacity. For a show like this the bleachers were tucked away and lots of room to dance on the floor.

We got some beers. Met some other Phans, Larry from LA was awesome and he bought me a beer too. Then the lights went down and Phish came onstage. They opened with Llama but a funky version that they had only played a few times before. I knew the evening was off to a good start.

The first set had some great songs including Runaway Jim, a blistering 46 Days and closed out with a 17+ minute version of Fluffhead.

Set one was over and time for intermission. Hampton Roads has a nice patio section on the second level that we grabbed some fresh and cooler air. It was hot down on the floor.

We found our spot again down in front of Trey and got ready for Set 2. The opened with First Turbe before tearing into a strong Tweezer. Almost 19 minutes long and it was amazing. Phish took the song to several places, some spacey, some rocking and all very seamlessly.

Dirt was next before going into Backwards Down the Number Line and No Man in No Man’s Land. Both of these songs were a nice upbeat change to Dirt and got everyone dancing.

Cavern was next and this was one of the songs I mentioned during our ride up that I would like to hear. And it was great.

The set closed out with Suzy Greenberg after Gotta Jibboo that had a nice jam.

Now time for the encore. What would they come out with. In Raleigh they had played The Beatles, A Day in the Life. Since they had not played any covers I thought we may see a cover or maybe two?

They came out and did Shine a Light. It’ a beautiful song and had everyone in a very loving mood at the end of the show.  I was surprised to discover it’s a Rolling Stones song from Exile on Main Street.

We headed out of the venue and made our way to the car. Since Mike and I had not eaten we hunted out a Waffle House that wasn’t too near the venue for fear of it being packed. We found one and grubbed out, discussing the songs and the different parts of the show.

What was a great experience was being able to be on the floor and see the band a little closer. Nowadays if you want to sit up front it costs a lot. Also it was interesting to see their light show from the floor versus a hill or the upper decks. I was reading some reviews later and realized that I should have gone and sat behind the band for a few songs to see the lights from their perspective.

We drove back the next day listening to the show again. Mike and I both agreed that it was a good show but not a really great show. Especially compared to the night before. Mike stated the saying “Never miss a Sunday show” as we drove south to Carolina. Of course neither of us could swing it so we ended up listening to the show afterwards. All in all Friday was probably the best show, but Saturday and Sunday weren’t bad. Saturday’s show felt a bit experimental.

But that’s why you go to see live bands, especially those that change the setlist everynight like Phish. You never know what you’re going to get and the anticipation, excitement, and all the emotions create a unique and exciting experience.

One note, the ticket stub I had for this show was a digital one from TicketMaster that I bought on the secondary market. It had nothing but a QR code and their logo with show info. The ticket stub I posted here I found on Reddit as the artwork is so cool that I wanted to share it. And that’s the problem with digital tickets, they are souless!