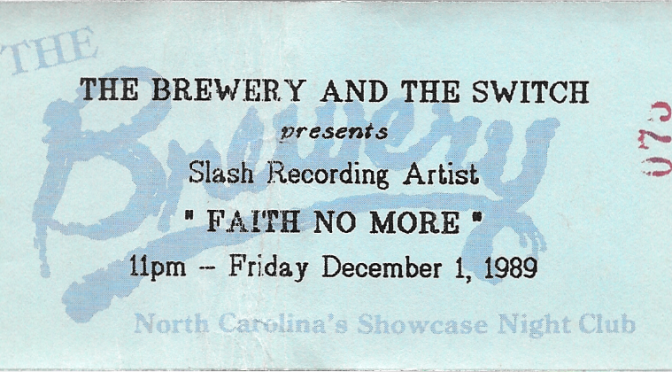 Faith No More is my favorite band from my college days. They released their big breakthrough album, The Real Thing, in 1989 and I was lucky enough to catch them that year. I listened to that album probably every day since getting it during the summer and wore it out. Their fusion of metal, funk, and progressive rock was a refreshing bookend to my college music journey. This was also in the age of MTV and Faith No More became huge the following year, 1990 when their video for Epic became a big hit. Personally I was happy to see many of the bands I had been listening to in college finally getting some recognition.  Watching this now makes me realize just how weird the late 80s/early 90s were in terms of style.

However the video did not breakthrough to the general public until the Spring of 1990. So when Faith No More played The Switch in December of 1989, they were a fairly unknown band on the east coast. Which was fine with me since I was able to catch them at a small venue with a few hundred fans and enjoy the show.

The Switch was located in the “industrial” part of North Raleigh near Hodges St. If I remember correctly, Kenny, the owner of The Brewery would book shows that were too big for the Brewery at The Switch. The Switch was about 4 times larger than The Brewery but it was a rock club and a dump. Sidewinder, Nantucket, PKM and other local bands played there all the time. I never liked going to The Switch, it was nasty, smelly and full of big hair, both men and women. But they booked some great bands in the 80s and was one of the few venues to see music back then.

The opening band was Mind Over Matter, a local group with similar fusion sound. I knew most of the members and always enjoyed seeing them perform. I don’t remember seeing them play that night but I’ve been told they killed it.

I remember going to the show with several friends and seeing many others before and after the show. The setlist I pulled together based on memory and setlists from recent shows of that tour. They may have played some of the newer songs that were appearing in the setlist during this leg.

Faith No More opened with the lead song from The Real Thing, From Out of Nowhere. This is a great opening song as it has a lot of energy and gets you pumped. Falling to Pieces was a few songs after and I was stoked since this song really spoke to me. My last year of college was a bit of an emotional roller coaster and I felt the lyrics to this song encapsulated my experience.

Then came the title track, The Real Thing and FNM just went off. The build up of this song and heavy guitars really make you realize how brilliant this band was. Mike Patton’s vocals are all over the place but in total control. The other songs that were really great during this show were the instrumental, Woodpecker from Mars and Zombie Eaters. The latter song was similar to The Real Thing in how it started slow and built up.

Of course you can’t write about Faith No More without mentioning Epic. At this time the song was not getting heavy airplay. What was interesting about Epic is that it had the different sounds fused together, rap, funk, rock, metal. But that’s what Faith No More was, a fusion of their different sounds. The clip below is hilarious in that Arsenio Hall is the host with a terrible intro and the band’s wardrobe is funky and stupid at the same time.

They closed out the show with their cover of Black Sabbath’s War Pigs. Their version was eventually selected for the Sabbath tribute album and kicks ass. Patton is able to cover Ozzy’s range and more and really makes this song sound like it was written for him.

What made this a favorite concert was that Faith No More’s sound was the culminations of all 5 members coming together. Mike Bordin pounding the drums combined with Jim Martin’s heavy guitar created a solid heavy metal sound. Billy Gould and Roddy Bottom on bass and keyboards respectively, sound as if you took Geddy Lee and split him into 2 musicians. Gould provides a great funk sound while Bottum gives progressive overtones with his keyboards and piano pieces.

Fronting the group with a big vocal range was Mike Patton, one of the lead singers of his time. I could go on for days about how brilliant Mike Patton is and how he continues to be a true experimental musical genius. But at this show he was still working hard and being his usual weird self. I remember him loading out the gear after the show which was odd. I think he wanted to get back to the hotel as fast as possible. Or maybe he wanted to do it. You never know with Mike Patton and that’s one of things I like about him.

After the show we hung out with Billy the bassist who had become friends with my friend Walter when COC toured out west years earlier. We took Billy to Char Grill to get some food and then hung out listening to music and talking for a few hours. Billy was a real cool dude and I was impressed with some of his musical influences he shared like Sade.

Overall this was a great show and lived up to my expectations. Faith No More played loud but is sounded good through The Switch’s PA system. The guitar was heavy and bass thick. Mike Patton sang his ass off. I would only get to see this band one more time before they broke up but I’m glad I caught this show.

If you’re looking for a good recording and viewing, Live at Brixton documents Faith No More live at then end of this tour in 1990.