This post is a bit bittersweet. A week ago Kelly Holland, former lead singer of Cry of Love passed away. The Raleigh music community lost a talented musician to say the least.  The N&O music critic David Menconi reposted a great article about the Cry of Love during their heydey.

To say Cry of Love was a great band is an injustice. These were four experienced and talented individuals that came together at a time when the Raleigh music scene was growing with great local bands. To me they were the best of all of them. They had a great rock sound and played tight. Their sound was just right, no BS, just straight up rock and roll.

Cry of Love had a driving sound that was centered on Robbie Kearns on bass and Jason Patterson on drums. Audley Freed on guitar is one of the best live players today. And Kelly brought all that sound together with a voice that did not quit. Together they were kind of like a southern-fried Led Zeppelin, with a collection of songs that had terrific range and emotion. 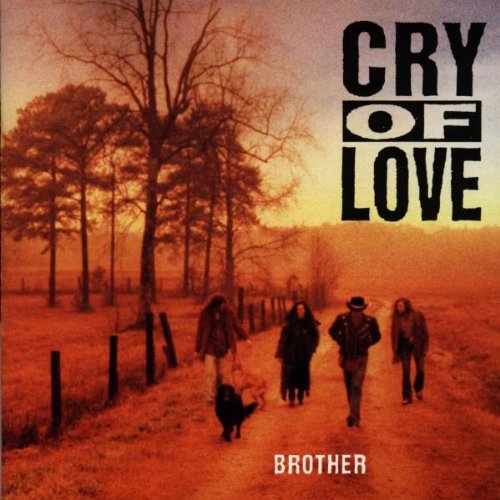 Their debut album, Brother is one of my favorite of all times and I can remember listening to Bad Thing for the first time and thinking it was Bad Company. It was hard but bluesy just like the great 70s rock bands like Foghat and Grand Funk, but also with a southern rock tinge a la Lynyrd Skynyrd.

This show was the second time I saw the band. The first was in Washington, DC at The Bayou on a weeknight to a small crowd. I dragged several friends there telling them they had to see this band! But it was a cold, winter night so we were there with about 150 people.

This show was the opposite with the show selling out The Ritz to a capacity 2,500 person crowd.  It was a hot August night and the venue was smoky and steamy due to the poor A/C at The Ritz. It didn’t matter. Cry of Love had just finished a few grueling year of touring to support Brother.

The band had been opening for ZZ Top, Robert Plant, and Aerosmith over the past year.  Their dedication payed off in that they had 3 singles that cracked the Billboard Rock charts with Bad Thing hitting number 1.

So coming home to Raleigh to play for your hometown crowd, friends, family, etc. created a special feeling to the show.  I was excited to see them play in Raleigh as I had moved back to town.  Raleigh was still a small community then and you knew most of locals, so it was a familiar group of people that evening.

I had to piece this setlist together based on songs I saw played on various bootleg CD covers found searching for artifacts. I even asked Jason Patterson if he remembered their old setlists but he could not recall. Cry of Love had a few songs like Broken Toy that were written after the album was released and did a few covers.

Cry of Love  opened with Gotta Love Me that has Audley’s signature bluesy guitar sound that transitions into heavy rock. Kelly begins with his classic “Baby, baby, baby, bay-bee” yell.  Followed by Too Cold in the Winter, a song that builds as it progresses. It begins with a simple beat and southern picking and strumming by Audley. The chorus allows the the sound to build and by the end of the song Kelly is wailing in perfect harmony with the band.

Carnival follows along with a new song, Broken Toy. Carnival is another song that starts a bit slow and builds to a strong chorus. Kelly’s vocals on this song really grab you. Broken Toy showcases Audley’s guitar intro and his amazing guitar playing. I can see why they added this song to the setlist. Drive it Home has some wicked guitar sound to it.

Bad Thing begins with the slow bluesy intro that’s not on the album. For about a minute and half they tease the audience thinking it’s a slow number and then they stop and go right into Bad Thing  missing a beat and they sound great. Next you hear that lick that tells you Highway Jones is coming up. This was the leadoff song on the album and always reminds me of the sound Stevie Ray Vaughn had on guitar. Peace Pipe and Hand Me Down close out the set. Peace Pipe has “hit song” written all over it. I love how this song builds into a tour de force of sound with Kelly belting out amazing yells to close out the song.

I always hoped that one day the guys would get together for a reunion show.  With Kelly’s passing that’s not going to happen. But we can always remember the great times Cry of Love created with their live music. I for one say thanks guys for the great times!