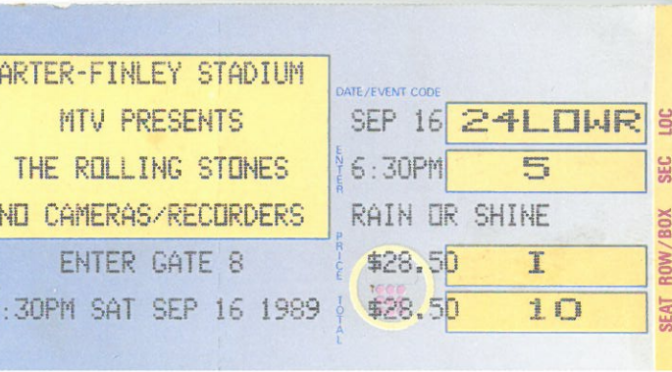 The Rolling Stones. A band that I was not heavily into at the time I went to this concert. I was a Beatles fan and The Stones were cool and all that but they weren’t the greatest rock-n-roll band as their fans claimed them to be in my eyes. That was all about to change.

Nontheless I was a fan of their music. I bought Tatoo You as a freshman in high school and really liked the entire album. Their previous album as a favorite of mine as well, Emotional Rescue. So I was stoked to finally see them.

I remember my older sister had seen them back on the 81 Still Life tour and told me what a fantastic show it was. She was probably the biggest Stones fan in our family.  My brother had a copy of Hot Rocks and we used to listen to it often. Also they were a constant on the classic rock stations of the time.

The Stones had not toured in several years due to Mick and Keith fueding in the 80s. I actually never thought they would tour again due to all the press and hype.

This was a good time for concerts in Raleigh. The Who, Pink Floyd and The Grateful Deal would all play Carter-Finely during the time I was attending NC State. Most of the big tours typically skipped Raleigh as it had no large concert venue other than Carter-Finely Stadium. You had to drive to Charlotte, Greensboro or Chapel Hill for most of the indoor arena tours.

The opening act was Living Colour who had just had major breakthrough hit with Cult of Personality. The one cool thing a bout The Stones is they always put up and coming acts on their opening bill.  I was big fan of Living Colour, as their guitarist Vernon Reid just ripped it.

Living Colour did a respectable job despite being the opening band. As usual their sound was awful as the crew did not fully push their sound through the full PA system. The stage was huge to say the least. It spanned the entire width of Carter-Finely reaching the upper deck on both sides. Living Colour occupied the center of the stage, the rough equivalent of a small music hall stage. They gave it a great effort the setlist is below.

After Living Colour finished their set it was time for The Stones. First I have to mention the stage. It was huge! I had never seen such a large stage before in my life with large video monitors on each side. In addition to it spanning the width of the field and lower deck, it rose at least 50-60 feet up!

They kicked things off with Start Me Up! Full explosions, fire and all stage effects to coincide with the opening guitar lick. Mick Jagger took the stage like no one else wearing a big green jacket with tails, prancing around like only he can. From there they went into Bitch and the full sound of the band and horns section sounded fantastic.

Minus a few tracks from Steel Wheels, the setlist covered their catalog with songs like Tubmlin Dice, Miss, You, Midnight Rambler, Gimme Shelter and Brown Sugar. Some great surprises were the Keith songs Before They Make Me Run and Happy. Two great tunes that Keith shows his singing skills. If he was not the guitarist for The Stones I always wondered what he would have been as the lead singer in a band.

There were two points in the show that I really remember. The first one was during Honky Tonk Woman. During the song giant inflatable women sprung up on both sides of the stage.

The second moment was late in the show during Gimme Shelter. The song had the great backing vocals that Mary Clayton had made famous on the original recording. There was a big staircase on the stage that appeared during the song with the backup singer descending as she belted out the classic line “Rape, Murder, it’s just a shot away!”

The Stones ended the set with Satisfaction and I think everyone attending was well satisfied with the performance. They came back out for one encore of Jumpin’ Jack Flash. Mick thanked the crowd, introduced the band and that was it.

This would be the last tour that original bassist Bill Wyman would play with The Stones and it was amazing. Although he and drummer Charlie Watt appear extremely subdued during the performance, their playing was excellent. Also Chuck Leavell, former member of The Allman Brothers Band was on piano and is still playing with The Stones!

After this show I have to say I became a much bigger Stones fan. Mick Jagger has more stage presence than anyone I had seen at that time. I remember saying how impressed I was with him after the show. Constantly moving, dancing, pointing at the crowd and engaged with all 50,000 fans without missing a beat. The Stones are one of those band you have to see live to really appreciate what they bring to the stage.