Reviewing this concert reminding me just how much I love Pink Floyd. I have not listened to them much the past few years but upon reviewing their 1987 World Tour I found myself rediscovering music that’s been a part of my fabric for a long time.

I think the first time I heard Pink Floyd was riding in the back of my brother’s car as he dropped me off at Pizitz Middle School in Birmingham, Alabama around 1978. Listening to Dark Side of the Moon (DSOTM) on 8-track I remember thinking how grown up I felt listening to it. Especially the song, Money. The sounds of the cash registers along with the music was different than anything I had heard before. I think it was also the second song I had heard profanity, the first being The Beatles saying “shit” on The White Album.

A few years later, The Wall came out and I listened to it often during high school. Many days I would listen to the album on headphones and enjoy hearing all the different sounds Pink Floyd brought into the recording. For my generation they were the one band that just about everyone knew and appreciated. Before I finished high school they had broken up and I never thought I would see them live.

A Momentary Lapse of Reason

Well thank goodness David Gilmour did not feel that way. A few years later he decided that Pink Floyd was not dead even though Roger Waters had left the band and was not happy about the reunion that did not include him. So much so that Waters sued the other members of Pink Floyd to prevent the use of the name for the album and tour. Waters lost and the new album, [A Momentary Lapse of Reason was released along with the supporting tour, the first in 6 years.

For me in 1987 as a junior at college, this was an epic show that I was not going to miss. This was the first psychedelic rock concert I had ever attended by one of the creators of the genre. I almost could not believe it was true when they first announced it, but before you knew it the new album was out and they were all over MTV! I can’t remember who I went to the show with but I do remember that I had just turned 20 and bought the ticket as my birthday present

This was also the first concert I saw in the Dean E. Smith Memorial Center, better known as the Dean Dome in Chapel Hill. The venue was only a few years old at that time and was the site for most of the major tours as it had larger seating capacity. But the Dean Dome is built for basketball first so the acoustics are OK for a domed basketball stadium. The advantage of seeing a band like Pink Floyd is that they care about the sound and the fan experience. Of all the shows I have seen at the Dean Dome, Pink Floyd sounded the best.

I drove up with 2 friends that were huge Pink Floyd fans, Greg and Tim. We had been talking about this show since it was first announced several months earlier and we could not get to Chapel Hill fast enough.

Shine on You Crazy Diamond

The show started off with Shine on You Crazy Diamond, the tribute to former lead singer Syd Barrett.  The slow intro of horn sounds coupled with the echoing guitar picks eased the crowd into the evening ahead.

From the very beginning you also realized that this was probably the best light show you were going to see for some time. There was a large round screen behind the drummer as well as multiple moving lights and lasers. Forget the Pink Floyd light show at the Morehead Planetarium, this was the real deal!

The rest of the first set was devoted to the new album. I had bought the new CD and liked about half of the material. It’s more the David Gilmour side of the band which you would expect. The songwriting was decent and it had that Pink Floyd trippy sound. Learning to Fly was getting a lot of airplay as the first single.

Pink Floyd closed out the first set with what I thought were the best tracks from Momentary Lapse of Reason. Dogs of War was the closet they sounded to the Roger Waters years. The sent ended withOn the Turning Away, a mellow acoustic song that reminded me of Wish You Were Here (WYWH).

This was also the first concert I attended where there was an intermission. I remember running into a few friends from high school during the break and we were wondering what songs they would play during the second set. I soon found out as the band came out for the second set, which opened with One of These Days.

One of These Days

One of These Days is a classic Pink Floyd song and this was a really great performance since it’s an instrumental and a song where David Gilmour plays slide guitar. A great example of their experimental aspect of their music, the song builds on a repeating bass line that drives the whole song. Drums, guitar and everything else as the song builds to a giant crescendo and the striking piano keys. A longtime favorite song, I was enjoying hearing it live. The lasers were great during this song and at the end a giant inflatable pig from the Animals album appeared at the other end of the stadium.

Then came the familiar ticking and ringing of many clocks letting you know the next song was Time from DSOTM. The rotodrum intro was perfect and the video screen was showing various clocks and lasers matched the beat. When the song finally kicks in and you hear the familiar lyrics, “Ticking away the moments that make up a dull day.” It’s hard to express how awesome that sounded then and it still gives me chills when I hear it today.

Time segued into On the Run like it does on DSOTM. The large video screen had images from the DSOTM tour of various characters. This is a cool instrumental as it is very experimental with various random voices, sounds, and other elements. It ends with a harsh crashing sound from a guitar that sounds like an airplane diving and crashing.

Wish You Were Here

After the crowd applause, the familiar acoustic beginning to Wish You Were Here began. This is one of my favorite songs and I’ve always loved the simple acoustic guitar sound that runs through the song. The lyrics are some of the most true to life words I’ve ever heard in a song. Even though the song is a homage to Syd Barrett, I find it speaks to me and anyone going through life. There’s always someone we miss from time to time and this song captures both the sadness and joy in that feeling.

Next was Welcome to the Machine that opened with the animation from the 70s tour of the giant metal ball that turns into the some metalic animal. A great edgy song with some amazing synthesizer effects it sounded great. Some more from DSOTM was next with Us and Them. The saxophone sounded just like the album it was incredible. After the song ended you heard the sound of cash registers and knew that Money was coming. The crowd exploded and I was pumped. I had listened to this song as long as I could remember.

The bass plucking away with the cash registers followed by the trippy guitar has to be one of the most famous rock songs. Money is another song that has some of the best lyrics including, “Money get back
I’m all right Jack keep your hands off my stack.” As the song hits the saxophone solo you can really appreciate how big of a sound Pink Floyd creates. Granted there are 8 musicians and 4 backup singers on stage but you have to make it all work together and they did. The song closes out with a fantastic guitar solo that gets slow and bluesy for a bit before building back up.

Wow, how can you top that? Well you go back to The Wall and pull out Another Brick in the Wall, Part 2. I remember this song being my anthem in junior high soley because of the lines, “We don’t need no education’ and “Hey teacher, leave those kids alone!” The set ended with Comfortably Numb which was the biggest hit from The Wall and one of Gilmour’s best performance of the evening.

After the set break the band came out with 2 more songs. The first one being a new song, One Slip. Then the band broke out Run Like Hell. One of my favorite songs from The Wall. From the beginning bass to the screaming voice it captures the fear of the song so well. The band finished and the crowd was on their feet showing their appreciation for a show that was totally worth the wait.

I got back to Raleigh and called my buddy Jimmy. He asked me how the show was and I told him it was incredible. In fact I said we need to go to the show the next night, which we did. That was also the first time I went to see a concert 2 nights because it was such a great show.

I still would love to see Roger Waters perform with Pink Floyd and can say that was the only negative part of my review. Without Waters you miss his incredible bass and guitar playing but he also adds that crazy element to their sound and vocals. 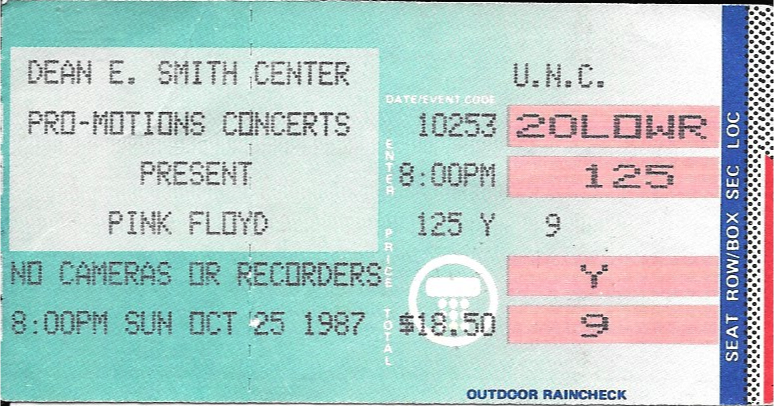